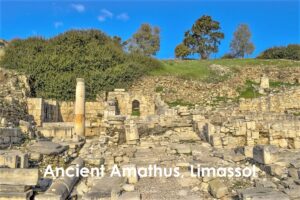 The Amathus archaeological site is located 11 km east of the city of Limassol and is considered one of the most important ancient and historical sites of Cyprus. Traces of the earliest human presence, dating to the Neolithic period, have been detected during archaeological excavations on the hills neighbouring Amathus. During the Archaic period the town acquired s 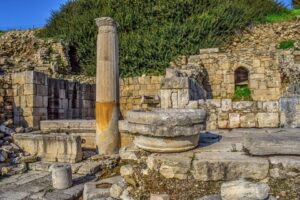 pecial wealth as one of the Kingdoms of Cyprus, and had remarkable commercial relations both with the Aegean and the Syropalestinian coast. Since at least 4th c B.C, the goddess Aphrodite was worshipped on the top of the hill of the acropolis. Over the centuries, Amathus was conquered by many conquerors including the Phoenicians, Persians, Ptolemies and Byzantines. Amathus is a Unesco World Heritage site and the legends and mythology associated with the ancient city further enrich its cultural and historical value. 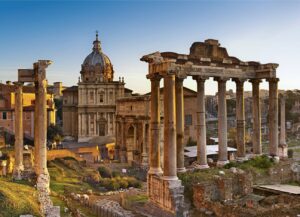 The Imperial Fora are a unique architectural complex in the world, consisting of a series of monumental buildings and squares, the center of political activity in ancient Rome, built over a period of about 150 years, between 46 BC. and 113 A.D. At the end of the Republican Age, when Rome had become the capital of a vast empire stretching from Gaul to Asia Minor, the old Roman Forum proved to be too cramped to efficiently serve as the city’s administrative and monumental centre, to be the very hub of public life. In 54 B.C., Julius Caesar was the first to come up with another square, originally intended as merely a straightforward extension of the Republican Forum. Caesar’s Forum was followed by Augustus’, then the Transitional (built  by the Emperor Domitian and inaugurated by the Emperor Nerva)  and, finally, Trajan’s Forum, which is undoubtedly the grandest. Together, the archaeological sites make up, from an urban standpoint, an organic complex renamed in the modern era the “Imperial Fora”, reaching from Capitol Hill  (Campidoglio) to the foot of the Quirinale Hill. Between 1924 and 1932, the Imperial Fora resurfaced following the demolition of which had been over the centuries built on top so as to clear the way for today’s Via dei Fori Imperiali.

Trajan’s Markets is topographically and conceptually linked to the grandiose urban system of the Imperial Forums.The area was to house warehouses, shops, and offices of the imperial administration and serve other commercial and administrative purposes. This monumental complex has buildings rising on several levels, on the slopes of the Quirinale Hill and on a semi-circular, towards the Trajan’s Forum. The monument, called Trajan’s Market on the occasion of the rediscovery between 1926 and 1934, was a multifunctional center with administrative activities at the service of the Trajan’s Forum, built in the same period. It on 6 levels and is divided into several buildings separated by streets along the slopes of the Quirinal hill, which it supports with the Great Hemicycle.
Inaugurated in the Autumn of 2007, the Musum of the Imperial Fora constitutes the first museum of ancient architecture and exhibits recompositions of scores of the architectural and sculptural decoration of the Fora, obtained with original fragments, casts, and modular additions in stone, according to the museographic choice of reversibility. This finds return the “perception” of the volumes and richness of the Fora and of the figurative programs, both tools of imperial propaganda.

The Museum occupies the buildings of the Great Hall and the Central Body and includes the Great Hemicycle with the section of the Trajan’s Forum. 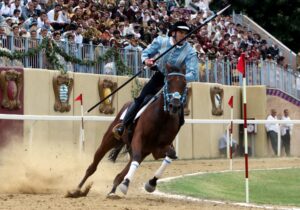 Since 1946 Foligno revives the atmosphere of the 17th century, a jousting tournament in the municipal stadium
The festival, revived in 1946, was inspired by a horse race dating back to the 17th century that tried to determine the order of priority for a knight of honor in loyalty to the prince or mistress of his heart.

Today dozens of knights, representing the ten districts of Foligno, put their skills to the test to try to put a series of rings of progressively smaller diameter, with a spear on a horse in the race.

It usually takes place twice a year: the Sfida(“challenge”) in June, and the Rivincita (“rematch”) in September introduced, the first Saturday of September, by the Baroque White NIght, and more tan 600 people dress up around the town. 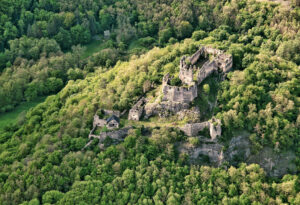 Ruins of the Čabraď Castle are in the Krupinská planina plain in south of Slovakia.

This originally sentry castle first mentioned in 1276 was built to guard the road leading to central Slovakian mining towns. In the 16th century it was rebuilt to the counter-Turk fort, which successfully resisted all Turkish raids. The Koháry family acquired the castle in the 17th century. They later moved into the more comfortable manor house in Svätý Anton and had the castle burned in 1812. The Castle is decaying ever since.

The castle hill of Čabraď and its environs is now the National Nature Reserve with the abundant occurrence of reptiles (grass snakes above all).

Access: on foot from the village Čabradský Vrbovok on field road (it takes about an hour and quarter). 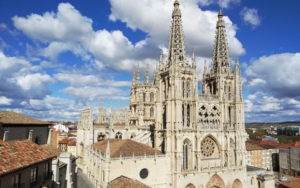 The cathedral is the most emblematic building in the city of Burgos. ST. Mary’s Cathedral was declared a World Heritage Site by UNESCO in 1984, the Burgos cathedral is one of the first examples of Gothic art in Spain, inspired by the purest and most classic French Gothic art, although before there was a Romanesque temple built between 1080 and 1095, it was built in no more than 40 years, although the temple continues to expand. 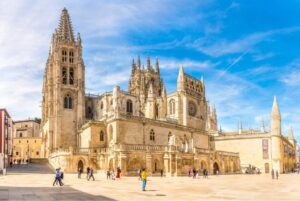 funerary chapels open to its Latin cross structure, with special mention to the Chapel of the Constables, Santa Ana, Santa Tecla, La del Cristo and of course the Golden Staircase, the Sarmental Gate (the oldest gate in the Cathedral), the Cloisters, the Chorus, the Main Altar, Sacristy the largest and the Cimborrio. On arrival al the foot of the cathedral, make sure to look up and watch the mouth of the old Papamoscas clock opening with the striking of the hour.

Is an impressive and aesthetically pleasing experience for visitors.